Let’s Ditch the Stereotypes. An Equal World is an Enabled World.

With 94% of women hearing that CrossFit and Weight Training will make them ‘too bulky’ it’s time to ditch the stereotype that muscles are only for men.

It’s a no brainer that being fit and strong is good for us – regardless of our gender, age or size. From encouraging a healthy bone density, to increasing our basal metabolism, bettering circulation, reducing stress, and improving our mental well-being, lifting weights has been shown to have so many positives.

So, with that in mind, surely there can’t be negativity towards anyone who chooses to pursue weight training?

These days, there isn’t room for thinking that women should ‘leave the heavy weights to the men’, is there?

Well, whilst mindsets have been improving in the last decade with campaigns like ‘Girls, inspired’ and ‘Strong is not a size’ there is still a long way to go until things are equal.

Statistics in the 2019 Active Lives Report showed that there are over 721,800 more inactive women than men in the UK and that 35% of girls aged 14-16 don’t like taking part in physical activity because of a lack of confidence and a dislike of being watched.

It’s a gap that urgently needs addressing. We wanted to hear from our community to see if they’d experienced similar negativity since starting CrossFit and weight training. We spoke to 572 women and this was what we found out…

Despite 94% of women receiving negative comments, CrossFit and lifting made them feel empowered and strong.

85% of women in the survey felt more body confident showing a real disparity between the empowerment women are experiencing through training, and the negative comments they are receiving purely on the aesthetics of their bodies. Here are just a handful of the hundreds of messages we received:

‘You’re getting far too muscly now’

‘Trust me, just stick to cardio and you’ll get a much more womanly figure’

‘What does your boyfriend think of you putting on all that muscle?’

‘A bit of muscle is okay just don’t take it too far and end up butch’.

‘You were gorgeous the way you were. I just don’t understand why you have to keep taking it too far’.

‘You actually look like a wrestler – your traps are huge!”

‘Your body used to be so sexy, I just think your abs stick out too much now’.

‘I just can’t understand why you want to look like a man’.

‘If I were you I’d leave it at that you don’t want to end up like those pro CrossFit girls’.

‘I’d never do CrossFit, I don’t want to end up getting huge and they get gross hands’.

‘ All that heavy lifting, drinking protein shakes… it’s not very feminine is it and I bet it’s not good for you either!’.

The ‘Each for equal’ theme of International Women’s Day this year is about “challenging stereotypes, fighting bias… and celebrating women’s achievements.” We want to help put an end to it being OK to tell a woman that something she loves doing is wrong because it doesn’t fit in with an outdated social norm about what ‘femininity’ is.

In our survey, an amazing 77% of women felt they could compete with the males in their gyms. CrossFit is completely scalable, so everyone from any gender, fitness level or strength can take part. It doesn’t matter if someone in the gym is lifting 60% more, or doing a workout with more technical movements – everyone can take part in the same workouts.

Every movement and weight can be scaled up or down to a level the individual feels comfortable with. This means that men and women from all walks of life can have fun training and competing together in the same arena. Why can’t we take hold of that positive equal atmosphere we get inside a CrossFit box and normalise it in every day life too? It’s time to stop women hearing stereotypical, biased comments about muscle being ‘unattractive’ or ‘masculine’.

Many of the incredible women we spoke with, from all ages, sizes and abilities had such positive messages to share about how their lives have changed for the better.

Some women spoke to us about how they’d been able to achieve a healthier relationship with their body confidence by training for strength goals instead of weight loss goals. Some women who’d been criticised for being ‘too skinny’ in the past told us how focusing on building strength helped them ignore those negative comments and instead, celebrate what their body can do. Some told us that they’d found CrossFit and weights later in life and how it had completely changed their relationship with their body for the better.

No matter the back story, the inspiring messages were all the same: embrace your body for what it can do.

‘As a 66 year old woman I’ve become stronger, fitter and seen the shape of my body change. I even have muscles! I believe more young women should be taught right from the start how weight lifting can improve health and bone density! Let’s stop the fad diets to lose weight’. 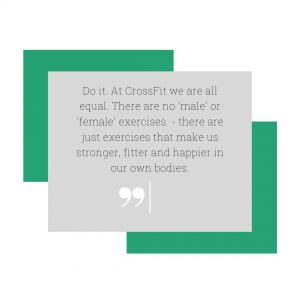 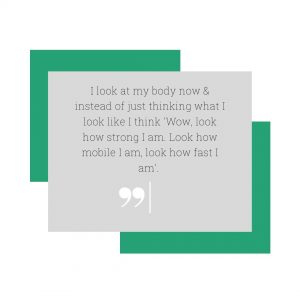 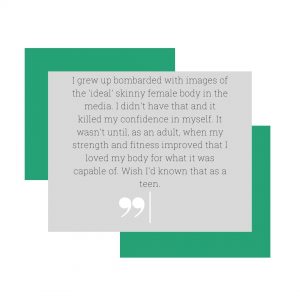 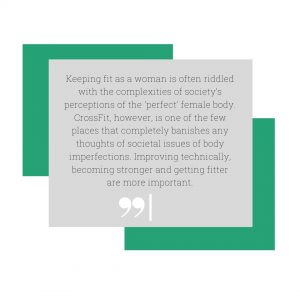 CrossFit encourages improved fitness in everyone, no matter your age, sex or body shape and it’s growing in popularity all the time. We’re lucky here at BoxMate to be involved in a sport that holds women and men as equals with pro-athletes getting the same coverage in the media.

Katrin Davidsdottir wrote in 2016 “how lucky I am to be a part of a sport where gender is irrelevant.[…] I’ve trained in CrossFit boxes from Boston to Reykjavik to Madrid. At each one, I’ve seen strong, confident women who do their workouts with the belief that they can lift just as much, run just as fast and work just as hard as their male counterparts.”

However, even with this incredible positivity in CrossFit, there is still a long way to go before it becomes ‘normal’ for women to want to build muscle and strength. Unfortunately, much of the negativity starts way back in our formative teenage years at school. From less opportunities for girls to play sports (1.3 million fewer than boys to put a number on it) to a severe lack of female role-models in fitness, and a never ending perpetuating image in the media that skinny = beautiful, it’s no wonder that girls are less active than boys.

Girls statistically shy away from sports or workouts that might build muscle and make them appear ‘bulky’ or ‘less feminine’ as they are never properly taught about the positives that muscle and weight training can have for them.

99% of women in our poll felt there needed to be more education from an early age of the positive impact weight training can have for us. One women wrote: ‘Traditional concepts of what ‘femininity’ is have put so many limitations on us. The more of these unhelpful constructs we can break down, the better’ and we couldn’t agree more.

One real stand out message that came through from our poll was that so many women who had obvious, visible muscle as a result of weight training had been told that their muscles were unattractive, undesirable and made them look ‘like a man’.

These were the most common words cropping up in the responses we had: 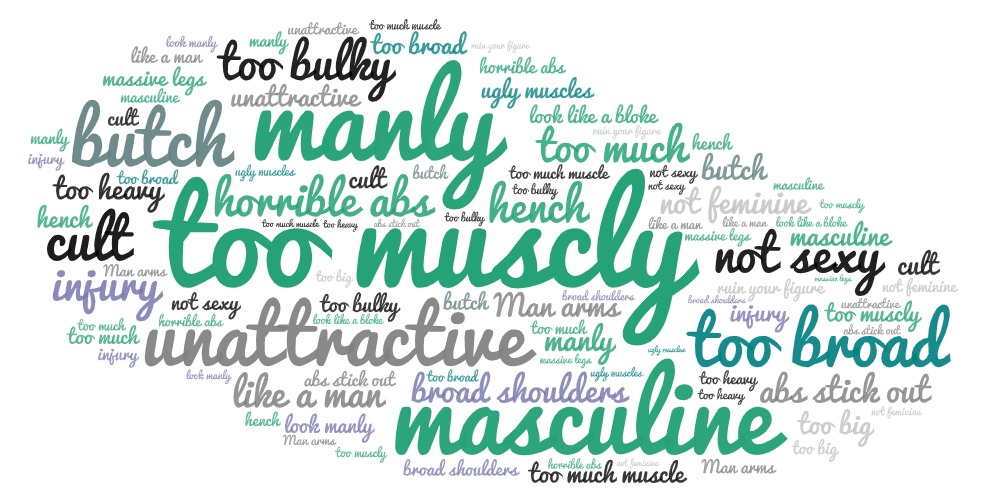 We strongly believe that women of all backgrounds, ages and body type should feel they can enjoy CrossFit and weight training without a fear of being judged on their body shape. We want to help show that weight training and competitive fitness is something to be celebrated. Strong is beautiful at every size.

We can all do our bit to inspire change, whether that is talking about the positive benefits of getting into weight training, or showing off our muscles with pride to help normalise the image of a muscular women being beautiful.

So, with that in mind, we want you to meet 4 incredible female CrossFitters who absolutely love their sport. They all have muscular physiques and have all been told, at one point or another, that their muscles are ‘too much’ or make them ‘look like a man’.

Here they are doing their thing and smashing through the stereotype that ‘muscles’ are just for men.

Join us in celebrating women for what they can do, not what they look like. 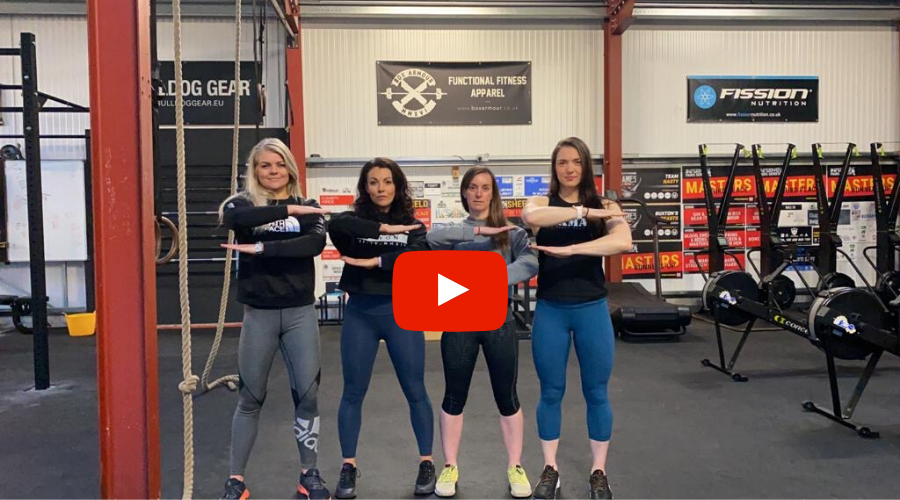 4 Ways to Boost Communication in Your Box.

Make the most of BoxMate 😎

How Coaches are Keeping the CrossFit Community Motivated.

Get Your WOD on For World Health Day 💪🏻